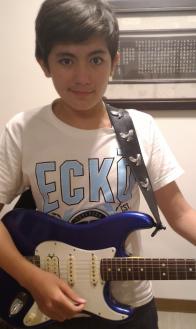 Since finishing up Master Class in Beijing back in May, Owen officially started his journey in his voice changing.  It became very obvious around August and now, his voice is almost as deep as a grown-up.  Not only does he still occasionally sqeal when he speaks, normal for the kid whose voice is changing, it also happens when he sings.  Lately, his voice is finally showing a sign of stabilization.  A lot of poeple are very surprised at how his voice has changed!  Listen to this 10 second clip, you will be surprised too!